Presented for reference and enjoyment, Archives showcases a selection of rare, historic and valuable items which have been successfully represented by Sportsman’s Legacy.

McGlaun, Bill, set of ten African big game world records. In 1991, Sporting Classics Magazine commissioned renowned wildlife sculptor Bill McGlaun to create a set of bronzes depicting the world record trophies from nine African big game species, along with the iconic zebra. These bronzes were cast and then polychrome painted by hand to bring out the beauty and unique features of each animal. Only 11 complete sets were sold (along with approximately 25 individual pieces), and a 12th set, this one, was created for the director of the project. The price is firm and layaway is available. $8,500 plus shipping. 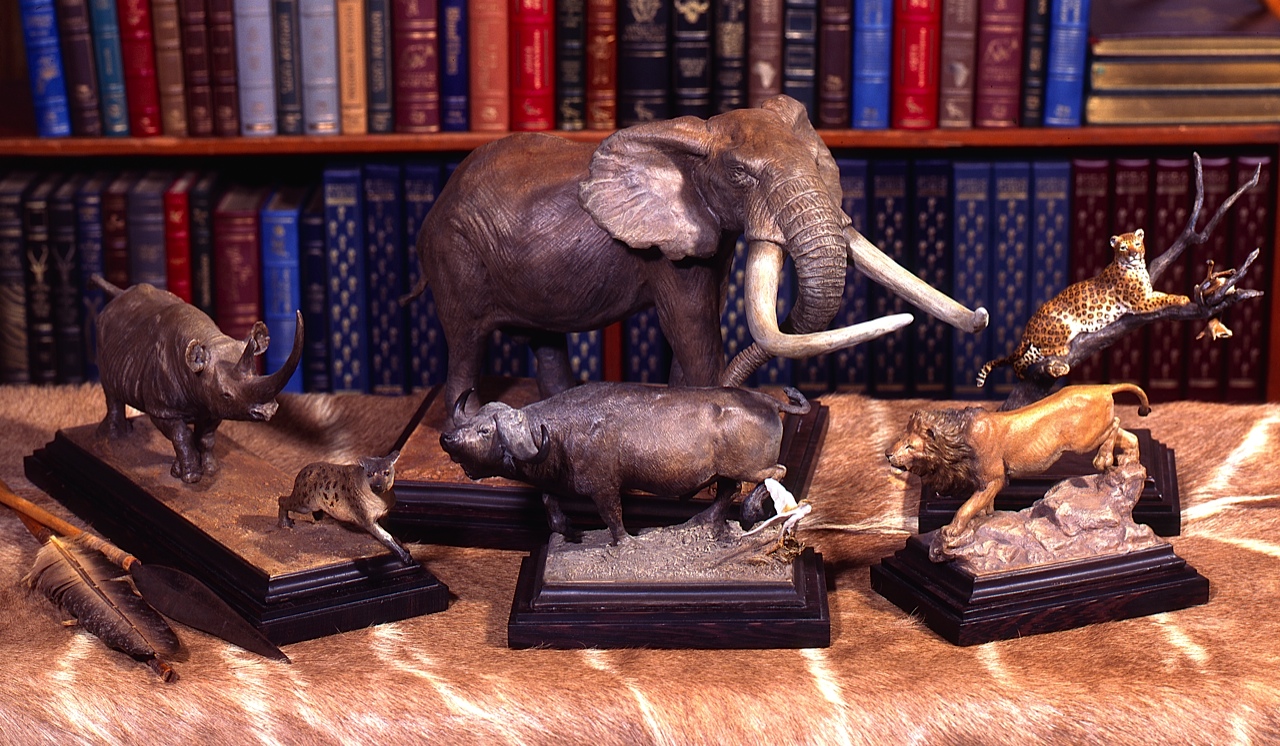 As is sometimes the case with unique and valuable firearms, a degree of speculation and unintended misinformation has become associated with this rifle. The historical and background information presented here was gleaned from direct interviews with Mr. Nick Makinson and Mr. Adone Pozzobon.

Crafted over a 15-year period by N.J. Makinson & Son, this spectacular .600 Nitro Express is the only rifle of this caliber Makinson ever produced and one of approximately 30 firearms which comprise their total output. Not intended for sale, it was concepted and created to showcase the extraordinary level of craftsmanship and detail a client might expect from a firm founded to provide bespoke firearms which equal or best those from the storied houses of London. The rifle was owned by the company’s financial principal, Mr. Milan Babiar, until approximately the time of his passing. Fittingly serialed “600”, it features 26-inch barrels (sourced from Ferlach as unfinished tubes), each with a finished muzzle diameter of .865 inches. Tapered and scalloped, the front sight base rises from the rib and transitions to a broad pedestal that secures a substantial brass-beaded blade. Possibly as an intended but fleeting courtesy for an imagined gunbearer, a sling loop attachment has been fitted to the underrib, yet its counterpart was never positioned on the toe line. A drift-adjustable express rear sight large enough to chock a corporate jet rides atop an equally massive quarter rib. The action bears a London proof, appropriate in as much as it was acquired from the J.B. Phillipson Company. The pinless (or picture) locks were a special order from York & Walling. (Both Phillipson and Y&W are well-respected suppliers to the premium gun trade.) Mr. Makinson discovered the oversized matching two-piece blank at a New York firm. Sadly, the name of the craftsman who shaped and finished the stock has been lost to history. Among special appointments are extended tangs, rolled trigger guard, trap door grip cap and a blank oval on the toe line. Additional mechanical features include ejectors, automatic safety and an articulated front trigger. While the stock is graced with drop points and wonderfully-executed checkering set apart by partially Mullered borders and bearing what amounts to the perfect traditional scalloped cheek rest accented with a surrounding shadow line, it is the magic of the wood itself that staggers. Shot through with a heavy, winding figure dark to the point of being sinister, it maintains a brooding elegance through its full length.

ENGRAVING: Requiring some 1,100 hours over a period of two years until completion in 1999, the entirety of this masterwork was performed by Adone Pozzobon. In addition to creating every aspect of the elephant scenes and presenting them to Mr. Babiar for countless refinements until approval, Mr. Pozzobon quickly realized that it was necessary to craft his own engraving tools in order to produce the extraordinary detail the project demanded. By way of example, the trunks and tusks of each elephant are approximately .001 greater in relief than their heads and bodies to create depth. Likewise, the foreground vegetation, background grasses, trees and even the sky come alive via similar dimensional relief. Shadowing within each of the three game scenes was accomplished by approaching every detail down to individual blades of grass from either side with the most delicate tools, rather than with chemical shading. The sky, grasses and other portions of the scenes actually come alive as the rifle slowly rotates in hand, yet the bulls themselves remain constant in the foreground. Detail is such that it seems possible to discern the blood pulsating through the veins in each of the outstretched ears. The left lock features a grand old bull and his askari moving across the savannah, possibly at the moment the wise one begins to suspect the presence of a hunter and flares, the younger honoring. The right lock showcases another pair, the greater bull with his head high – the precise instance when a PH would hiss, “Take him! Take him now!”. The underside presents a solitary bull moving along a path as have countless of his generations before, the background in staggering relief. Each of the three scenes is surrounded with an appropriately bold floral and vine design that continues over the full length of the quarter rib, opening lever and tangs, reappears on the front sight base and in wedges over the chambers, and at full coverage over the forend furniture, safety and grip cap. Both “SAFE” and the serial “600” are presented in gold, and the engraver’s signature appears on the flat near the front trigger.

DIMENSIONS: Weight is 15.0 pounds, including a removable mercury recoil reducer secured in the stock. Length-of-pull is 14.7 inches, drops are 1.5 and 2.1 inches, and cast off is approximately .30-inch.

CASE: A fitted leather and oak takedown case with brass furniture secures the rifle. Lined in red felt, it is additionally appointed with a two-piece ebony and brass cleaning rod, snaps, oiler, striker bottle and a fitted sling loop. The lid is secured by twin leather straps and a brown canvas field cover provides the proper finishing touch. A Holland & Holland maker’s label is positioned on the inside upper lid and the top of the oiler is similarly marked. The case does not lock as the internal portion of the mechanism has been removed. Otherwise, it presents in approximately 98 percent condition.

INCLUSIONS: Kynock five-pack box with two original 900-grain solids, one original 900-grain soft and two additional rounds of softs prepared with Wenger-marked brass. A pair of photographs of the blanks prior to shaping and a  5.5-inch square Makinson table card are also present. The price is firm and layaway is available. $200,000 plus shipping. 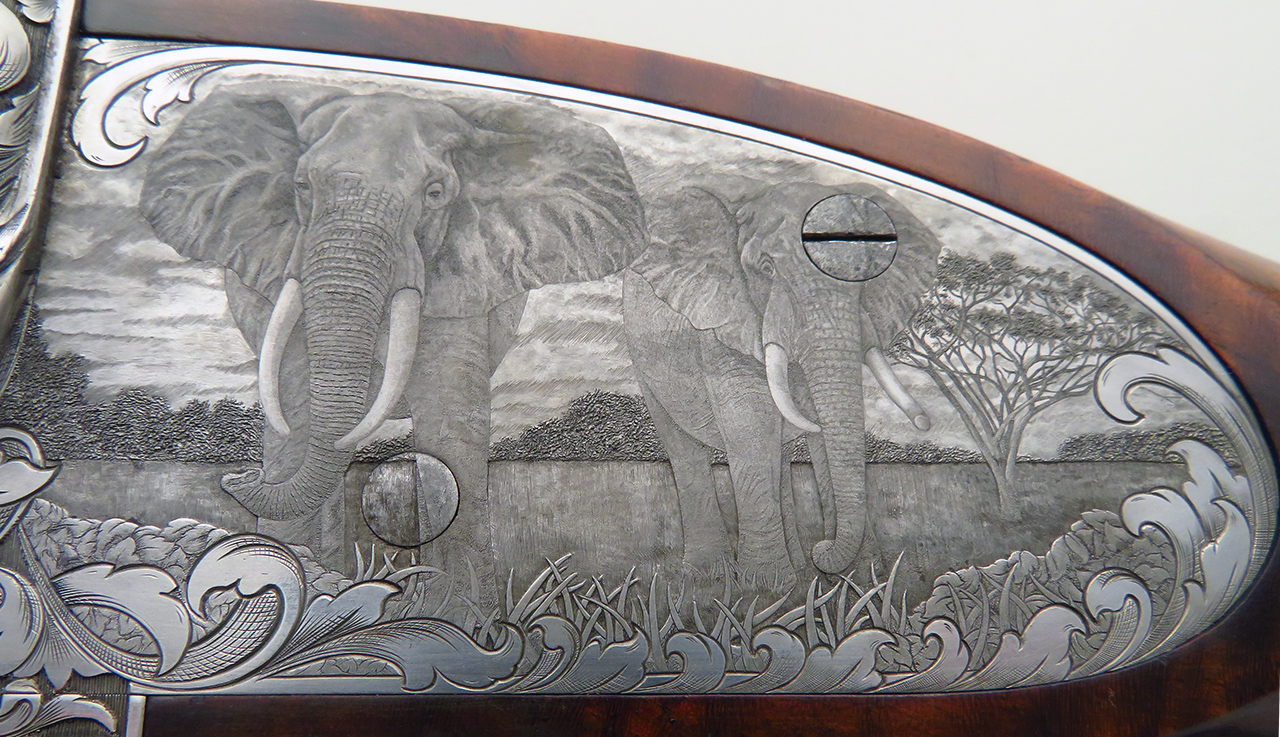 As created in 1983 and fully supported by factory letters, this extraordinary cased pair of Colt Woodsman Match Target .22 LR pistols stands at the very pinnacle of the gunmaker’s craft. Serial 310375-S has a 4.5-inch barrel, while 058030-S wears a 6-inch barrel. Otherwise, as they were mated from inception, the pistols are identical in every respect. ENGRAVING: As flawlessly executed by Colt Master Engraver George Spring, the Grade C (in period Colt-speak, 75 percent coverage by a designated Master Engraver), a delicate floral and scroll extends along the slides, frames and flutes, then repeats on the lugs. In turn, these fields are accented by fine gold wire to such a high level of perfection it defies description. STOCKS: Each pistol showcases target stocks (right hand presentation) shot through with heavy figure. CASE: As lettered, the original walnut presentation case features a French-fitted interior and has the “Colt Custom” medallion inlaid on the outer lid. CONDITION: Near perfect and absent evidence of firing since delivery, only slight indications of handling are present. Magazines are proper. The case exterior has two minor edge impressions and two modest scratches on the lid. Interior is equally fine. (It is possible the case has been relined, as the factory letters seem to indicate lining color “Francis blue”.) Each set of stocks has minor wear (rubs and modest chipping under the finish) on the edges. FACTORY LETTERS: Each pistol is supported by an included individual letter detailing the features as well as the pairing. The price is firm and lawaway is available. $22,500 plus shipping. 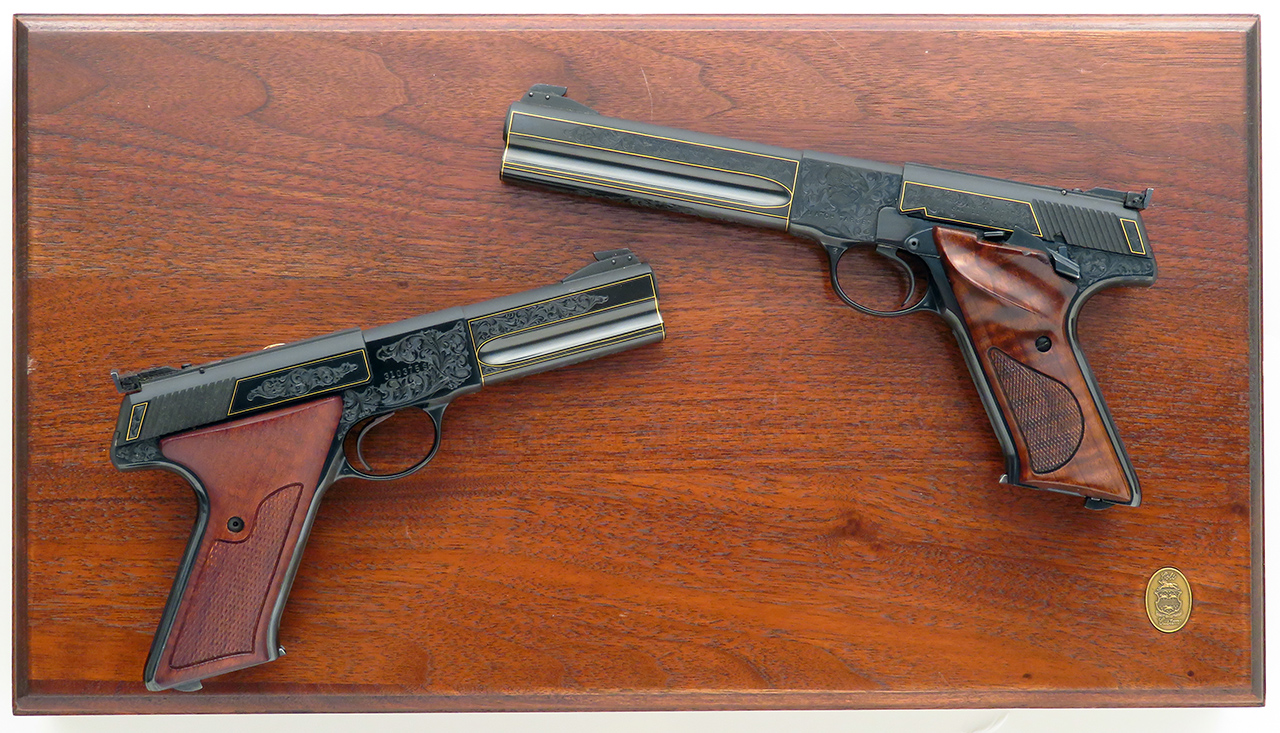 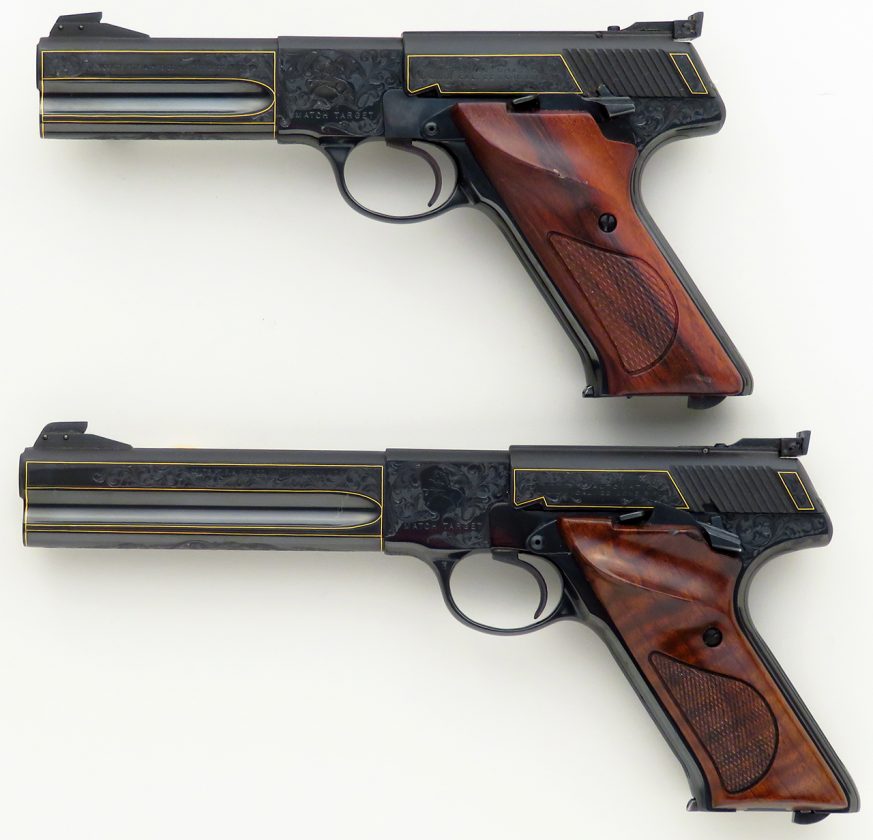 Piotti King 1 .410 SLE. Created in 1979, this spectacular little sidelock weighs just 5.4 pounds and feels even lighter due to its near-perfect balance. The barrels are 26 inches long, choked M/F, topped with a raised matted rib and have three-inch chambers and ejectors. Important features include bushed strikers, mechanical safety, articulated forward trigger, splinter forend, leather-wrapped pad and borderless checkering. ENGRAVING: Granetti’s delicate foliate and scroll graces the action, guard, tangs, lever, forend furniture and screws to full coverage. The execution is brilliant as well as appropriate at this scale. “PIOTTI” appears in gold just below the left lock, serial “7411” flows through a ribbon on the lower tang, a gold crown centers on the opening lever and a gold crest with the initials “LeB” is on the splinter. (The initials are small and very shallow, thus permitting easy alteration.) The engraver’s signature appears under the guard. DIMENSIONS: As stated, weight is 5.4 pounds. Length-of-pull is 14.8 inches, drops are 1.6 and 2.4 inches, and cast appears neutral. CONDITION: Lightly handled and almost certainly never hunted, it stands at 99 percent overall with no shortcomings worth even a passing mention. In fact, the snap caps do not appear to have ever been inserted! CASE: The leather and felt-lined case is of the highest quality. It includes an oil bottle, snaps, two-piece cleaning rod and a leather pouch with customary jags and end pieces. The case is also 99 percent. The replacement cost on this shotgun is just over $50,000. The price is firm and layaway is available. $32,500 plus shipping.